A cross-sectional study was conducted from August 2002 to July 2003 in 8 units of the Departments of Gynecology & Obstetrics of Bangabandhu Sheikh Mujib Medical University, Sir Salimullah Medical College & Mitford Hospital and Sher-E-Bangla Medical College & Hospital. Basleline data were collected both retrospective and prospective. After collection of baseline data, result of prescription audit was disseminated among the prescribers through face-to-face discussion and workshop in one unit with particular emphasis on cost perspective.

Quality of record keeping was found satisfactory as there was no significant difference between prospective and retrospective data. Seven different treatment plans were used for prophylaxis. Highest patients were treated with plan-A (46.46%), followed by plan-B (35.42%) and lowest with the single dose, plan-F (1.04%). Average duration of antimicrobial therapy was highest in plan-D (10.00 ± 1.55 days) and lowest in plan-F (6.40 ± 0.40). Average cost of antimicrobial during hospital stay was highest in plan-B (1497.25 ± 18.80 taka) and lowest in plan-F (90.00 ± 0.00 taka). The difference between percentages of patients with different condition of the amniotic membrane receiving same treatment plan was not statistically significant. The difference in patients receiving same treatment plan for different indications was not statistically significant except in treatment plan-F, where patients with relative indications received plan-F significantly higher (p < 0.001) than patients presented with absolute indications. Significant relationship was observed with economic status of patient and choice of treatment plan. The average duration of antimicrobial therapy of patients having infection after cesarean section, was 12.16 ± 0.42 days and those of patients having no infection after cesarean section, was 7.19 ± 0.08 days and this difference was highly significant (p < 0.001).

The initial success of 'prescription audit & feedback' in improving cost-effective prescribing generated opportunity for partnership between pharmacologist and clinicians in the field of promotion of rational prescribing. The cost-effectiveness of 'prescription audit & feedback' and its' reproducibility in other clinical situations should be investigated by the future researchers to make this particular intervention acceptable to the policy makers. 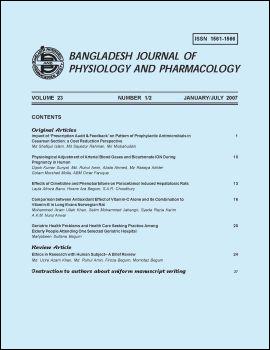