Background: The spontaneous birth of a live infant can convey a huge degree of both satisfaction and achievement for both the mother and her partner. Many factors influence the variation in rates of caesarean section among hospitals throughout the world. These included patients demographic characteristics, underlying medical and obstetric complication, hospital facilities, hospital practice and physician practice style. Objective: The present study was planned to determine how the outcome of women change with timing of admission either in active or latent phase of spontaneous labour.

Methods: This was a prospective observational study, which was conducted at labour ward, department of Obstetrics and Gynaecology, BSMMU hospital and DMCH Dhaka, from February 1, 2008 to August 30, 2008, where data were collected prospectively. Patients with any medical or obstetric complications, rupture of membrane antenatally diagnosed fetal anomalies or death and with prior caesarean section were excluded from the study. Patients with cervical dilatation at less than 4cm were in group I. On the other hand, patients with cervical dilatation of 4 cm or more in active phase and these types of patients were allocated in group II.

Conclusion: It is shown that early admission to the hospital in low-risk women may negatively affect the outcome of labour and are at increased risk of prolonged labour, more oxytocin used, increased rate of caesarean section. 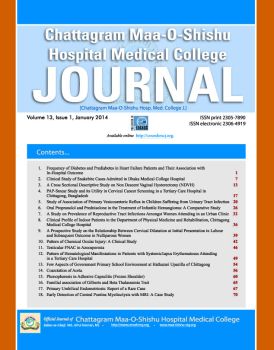 Authors of articles published in CMOSHMC Journal retain the copyright of their articles and are free to reproduce and disseminate their work.

A Copyright and License Agreement -signed and dated by the corresponding author on behalf of all authors -must be submitted with each manuscript submission.