A random sample of 15,500 school going children in the age group of 6-16 years from public and private schools of Bhaluka & Gaffargaon were screened for the prevalence of operable congenital heart diseases [CHD] during a period of 12 months.

Congenital heart diseases were diagnosed preliminary on the basis of clinical history and or clinical examination & confirmed by supportive investigations. Out of examined sample 350 were found suffering from CHD, giving an overall prevalence of 22.25 per 1000 of children far greater than that of the figure recorded in available literatures for other countries.

The prevalence rate was higher in girls than that of boys in the present study which may indicate a negligence of care taking towards female children in family. In consistent, children from lower income group had a higher prevalence rate compared to their middle income group counterparts. One hundred sixty children were found to be suffering from definite operable CHD giving a prevalence of 10.32 per 1000, where again girls were the main victims.

The finding of present survey suggest the need of large scale screening of apparently healthy children for CHD and family members of those suffering from CHD and that special attention to be paid to the occurrence of rheumatic fever or rheumatic heart disease in cases of CHD. 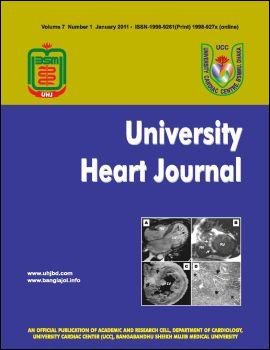 Authors are required to transfer their copyright to the University Heart Journal.